Poor Vision Can Be Misdiagnosed as Cognitive Decline 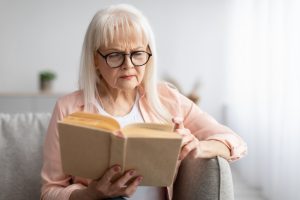 Cognition tests that rely on vision-dependent activities may skew results for up to 25 percent of adults over 50 with undiagnosed eye problems like cataracts and age-related macular degeneration (AMD).

A new study by the University of South Australia suggests millions of elderly people with vision problems are being misdiagnosed with cognitive decline.

What Are Cataracts and Macular Degeneration?

Visual impairments affect approximately 200 million people worldwide over the age of 50. Cataracts and age-related macular degeneration (AMD) are common causes of vision loss but do not affect cognitive function. Cataracts are a clouding of the eye lens and are the leading cause of vision loss in adults over 55. Over half of Americans will develop a cataract by age 75.

AMD affects five percent of Americans aged 65 and older. Although it does not cause blindness, it affects the ability to drive, read, cook and do everyday tasks.

Poor vision can often be misdiagnosed as early brain decline when cognitive tests assess only visual ability. Researchers from the University of South Australia studied 24 participants with normal vision and asked them to complete two cognitive exams. One exam included vision-dependent activities, and the other used verbal-based metrics.

When the participants used glasses to simulate AMD, they received much lower scores on brain tests involving reaction time tasks compared to when they were not wearing the glasses. The research team noted no difference with verbal fluency tests when participants used the simulation glasses.

“The diagnosis of [mild cognitive impairment (MCI)] can trigger psychological problems (e.g., depression and anxiety) due to the stigma of cognitive impairment,” said University of South Australia PhD candidate Anne Macnamara. “For people with AMD, who are already experiencing physical and psychological issues due to vision loss, the multitude of repercussions that inaccurate cognitive assessments causes are an unneeded additional burden” (Scientific Reports).

Unfortunately, vision problems are often missed in clinical and research environments. The research team estimates experts underestimate visual impairments in half of all older adults. This statistic will increase as the population ages, so it is crucial that researchers examine vision when analyzing cognitive function in older people.

“Mobile apps can now be used to overlay simulated visual impairments onto test materials when piloting their stimuli,” Macnamara said (Medical Xpress). “Also, researchers can incorporate quick and simple screening tasks before getting people to do cognitive tests. Verbal tasks should always be part of the assessment, too.”

Call Your Ophthalmologist for a Comprehensive Eye Exam

When was the last time you visited your ophthalmologist for a yearly comprehensive eye exam? An eye exam looks at more than just your vision. It offers a glimpse of your overall wellness. Many chronic conditions show early signs in the eyes, such as diabetes, hypertension and heart disease.

Call today to make an appointment for the whole family. Early detection and treatment of eye diseases like macular degeneration, glaucoma and diabetic retinopathy can preserve vision and prevent further eye damage.